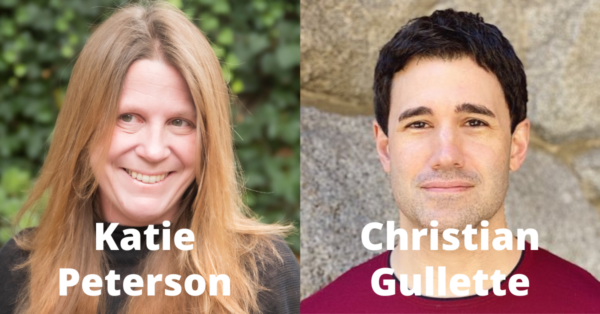 The Poetry Night Reading Series is excited to feature Katie Peterson with Christian Gullette at 7 PM on Thursday, December 1st, 2022, on the third floor (indoors) of the John Natsoulas Gallery, 521 1st Street in Davis.

Katie Peterson’s collections of poetry include This One Tree (2006), Permission (2013), The Accounts (2013), the winner of the 2014 Rilke Prize from the University of North Texas, and A Piece of Good News (2019), a finalist for the Northern California Book Award. Her fifth book, Life in a Field, a collaboration with photographer Young Suh, was selected by Rachel Zucker for the 2020 Omnidawn Open Book Prize. Her edition of the Brief Selected Poems of Robert Lowell was published in 2017. Her work has been supported by fellowships from the American Academy of Arts and Letters, the Foundation for Contemporary Arts, the Radcliffe Institute, and Yaddo. Her poems have appeared in the Birmingham Poetry Review, Changes Review, Literary Imagination, the New York Review of Books, and most of the other prestigious markets for the best poems. Peterson directs the MFA program in Creative Writing at UC Davis, where she is Professor of English and a Chancellor’s Fellow.

Christian Gullette’s poems have appeared or are forthcoming in The American Poetry Review, The Yale Review, Kenyon Review, New England Review, Pleiades, Northwest Review, and Los Angeles Review. He is a National Poetry Series Finalist, the recipient of a 2022 Bread Loaf scholarship, and a 2022 semi-finalist for the Discovery / 92Y Contest. His manuscript has been a finalist for several prizes, including the 2021 Four Way Books Levis Prize. Gullette is the editor-in-chief of The Cortland Review. He lives in San Francisco with his husband Michael.

Gullette received his Ph.D. in Scandinavian Languages and Literatures from the University of California, Berkeley, where he was recently a lecturer teaching courses to graduate and undergraduate students in Scandinavian literature, translation theory, and Swedish language instruction. He earned his M.F.A. from the Warren Wilson M.F.A. Program for Writers, his M.Ed. from George Washington University, and a B.A. in English from Bates College.

This event will take place indoors on the temperature-controlled third floor of the John Natsoulas Gallery (521 1st Street) at 7 PM on Thursday, December 1st, 2022. As with a bank robbery, masks will be worn by many of the attendees. There will be an open mic after the featured performers. Open mic performances will be limited to four minutes or two items, whichever is shorter. As Strunk and White say, “Vigorous writing is concise.” The open mic list typically fills by 7 PM, so please arrive early if you would like to perform something during the 8 o’clock hour. Find out more about the poetry night reading series at poetryindavis.com.