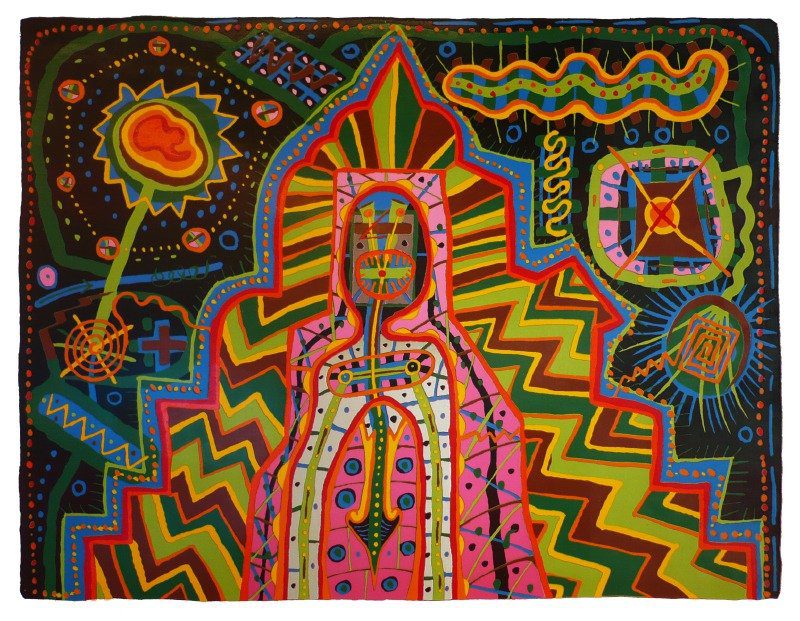 Known for his manic steel silhouettes of dog-faced flowers and perverse, joyful figures with
electrified grins, Mark Bulwinkle’s nutty artwork can be spotted across the Pacific coast, displayed
proudly in windows, overgrown gardens, and small businesses. Bulwinkle’s graphically cut steel
propelled him into fame, influencing the creation of Burning Man in the 1980s and even leading him
to reject an interview with Oprah in 1991. However, lesser known but equally impressive is his
extensive work in diverse media: ceramics, silkscreen, papier-mache, and even digital illustration. His
mastery acquired from 100-hour work weeks as a ship welder for Bethlehem Steel was important to
the development of his cut steel works, but equally key was his early training as a skilled printmaker
and graphic artist. Bulwinkle received an MFA in Printmaking from the San Francisco Art Institute
in 1974, making hundreds of fabulously intricate industrial enamel silkscreens and woodcuts. In
these early years, he also learned ceramic slipcasting techniques from the renowned trompe l’oeil
artist Richard Shaw.

This retrospective exhibition showcases Bulwinkle’s mastery of color and form in both two
and three dimensions throughout the last 5 decades, tracing the development of his art through
diverse materials and revealing the stories embedded in his work. On display are a selection of his
woodcuts and screen prints, including several gorgeous prints from his time at the San Francisco Art
Institute. Bulwinkle’s flamboyant ceramic works from graduate school will also be featured, as well
as papier-mache works that once decorated the walls of his iconic Manilla St. House, a towering steel
assemblage sculpture built around a modest townhouse that became a landmark in Oakland from
1975-1991. Recent cut steel works painted with colorful enamel will also be featured, which are often
imitated but unmistakably Bulwinkle’s.

The John Natsoulas Gallery is delighted to exhibit half a century of works from this rather singular artist.In
addition, we are overjoyed to present “Freedumb,” our brand new 18-foot steel piece by Mark Bulwinkle, installed on
the gallery façade.