It’s no secret: Sustaining a business during a pandemic is hard work. Restaurants and retailers must balance their efforts to draw in customers with ensuring a safe environment. To support them in their efforts, the Davis Downtown Business Association (DDBA), in partnership with the City of Davis, enacted Open Air Davis—an initiative which enables businesses to utilize outdoor spaces to accommodate a greater and safer service capacity.

As of Sept. 11, the north section of the E Street Plaza has become the latest space to be converted into an expanded pedestrian zone downtown.

The DDBA began with the granting of Temporary Use Permits in late June, allowing businesses to occupy sidewalks and parking spaces, thus creating a socially-distanced, open-air environment for the community.

Accommodations started with the weekend street conversions of G Street (between 2nd and 3rd) and 2nd Street (between E and F). From Friday morning through Sunday night, these streets remain closed to vehicular traffic, creating a walkable, street-fair atmosphere for the public to responsibly enjoy.

2nd Street did not experience the same successes as restaurant-laden G St, however: “G Street has been really successful in driving business and creating a safe and natural outdoor experience, but here, it was usually very quiet” notes Erin Arnold, owner of The Avid Reader, one of the many retail stores located within the 2nd Street conversion area.

Arnold, while greatly appreciative of the initiative, feels as though the objectives of Open Air Davis are more primed for restaurants than retail. “I love the idea of all these parklets that the city is okaying. I actually think it helped people feel like they had space to move and walk,” she shares. “But Friday to Sunday is a pretty large chunk of time for us to do additional staffing. That coverage for us wasn’t feasible.”

This sentiment is shared amongst the 2nd St. shops: For retail businesses, extra parking spaces can be utilized for curbside pickup, quick in-and-out excursions, and for those who don’t feel comfortable coming into the store or don’t want to be outside for long periods of time. Additionally, extended browsing can be limited to ensure safer indoor environments.

Arnold expressed excitement for the E Street Plaza conversion, which consists of a variety of eateries such as Yeti Restaurant, Taqueria El Burrito, and Sweet and Shavery. “I’m glad that it’s just moving somewhere else and not going away,” shares Arnold, “I think it’ll be a more natural fit to Open Air Davis.”

Armadillo Music, located on the top end of E Street Plaza, also looked forward to the change. In early August, the record store set up a vinyl pop up in the 2nd Street conversion that garnered unprecedented levels of community engagement: “It was extremely successful for us,” shares manager Paul Wilbur. “We were able to move out inventory that’s difficult for us to access in-store, and it was a great way for our customers to experience the store much more comfortably because it was outside.”

In order to maintain social distancing, Armadillo Music limits its indoor capacity to 10 customers at a time. With the conversion of E Street Plaza, the managers anticipate extra foot traffic as well as the space to support it. “We will definitely be involved in the plaza in front of our store,” notes Wilbur.

The E Street Plaza conversion will remain in operation all day, seven days a week, while G Street’s closure will proceed as normal, from Fridays to Sundays. These conversions are anticipated to last through November—although Woodstock’s Pizza managers Alexandria Yon and Ted Parks would love for some of the Open-Air-Davis-facilitated changes to be implemented even more long-term, such as keeping a parklet year-round, or hosting an occasional street fair once it is safe to do so.

“I’m here most of the weekend nights, and it feels as close to that Open Air vision as you can get,” shares Yon. “Sometimes people don’t even go to the restaurants: they just like walking up and down the street, listening to the music from the different places, social distancing themselves from the different parklets, and still participating and getting that interaction. It’s very nice.”

Encouraged by the community’s capacity to curate a comforting, lively, and safe atmosphere in these times, Woodstock’s Pizza hopes to see the city draw upon Open Air Davis as inspiration for the future. “Imagine how much more amazing this idea could be beyond Covid times. You could have a lot of people, restaurants, music, and vendors—like a block party,” envisions Parks. “It would bring lots of traffic in. But right now, the priority is keeping everyone safe.”

Victoria McJunkin is a senior at UC Davis and a regular contributor to The Dirt. 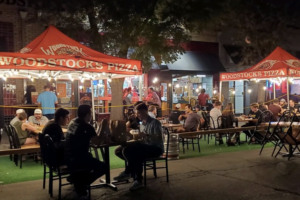 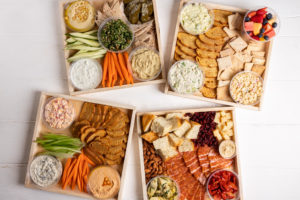 Months indoors can take a toll on anyone, but the… 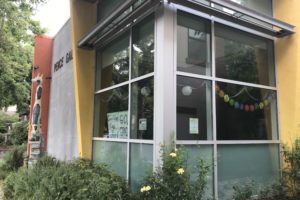 The Pence Gallery: An exhibition of resilience

The Pence Gallery has officially reopened! After a head-spinning five…