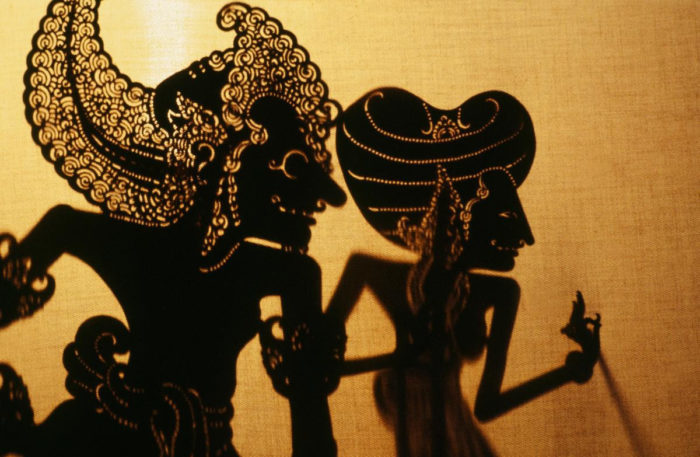 Presented in conjunction with the conference Rethinking the History of Indonesian Music, a conference made possible by the Henry Luce Foundation.

Wayang Bali, the Balinese Shadow Play (which features a live gamelan accompaniment), is one of the most revered traditional art forms in the world.

According to Balinese philosophy, a wayang performance is a symbol of the cosmos. The dalang (Shadow Master) represents God. The screen represents the world, including the atmosphere. The damar (oil lamp) is the sun. The banana log underneath the screen is the earth on which the creatures walk. The wayangs (puppet characters) are the creatures.  The accompanying gender music represents irama djaman, which means in phase with the periods of history.

Plots for the shadow play are drawn from the Mahabharata myth cycle. Five brothers fight one hundred jealous cousins in a power struggle involving gods, demons, magical weapons, and a beautiful princess.

Wayang Bali takes place in two languages simultaneously: the ancient language and the language of the audience.

You MUST provide proof of Covid vaccination or a negative Covid test at the door. Please take a moment to read the latest information on attending our events.

Larry Reed is a nationally and internationally acclaimed artist and is a trailblazer in contemporary shadow theatre. He is one of the first Westerners to have trained in the traditional Balinese shadow theatre (wayang kulit) and is a “dalang,” or “shadow master,” who manipulates over 20 carved leather shadow puppets while simultaneously serving as the conductor of the accompanying gamelan orchestra, the director, and the stage manager. Over the years, he has performed over 250 shows in this tradition around the world.

ShadowLight was founded in 1972 by filmmaker, theatre director, and shadow artist Larry Reed. Reed’s interests in and appreciation of shadow theatre traditions, film and world cultures, and the passion to express them in an integrated fashion, motivated its foundation. He is one of the few Westerners to have trained in the traditional Balinese shadow theatre and is a dalang or “shadow master.” After over 15 years of studying and performing in this tradition, Reed expanded the scope of ShadowLight’s artistic activities in order to create a deeper connection with contemporary American audiences.